Hello everyone. Before Christmas I played around with SQL Server 2017's inline Python integration capability. This capability was announced early last year, with the corresponding integration with R already being possible for a number of months. The main benefits from this are the abilities to:

So the huge benefit is the ability to stay within your preferred IDE, connect to a SQL Server instance and do the computations on the SQL Server Machine. So no more clunky data transferring! To address the second point – operationalizing a Python model/script is as easy as calling a stored procedure. So any application that can speak to SQL Server can invoke the Python code and retrieve the results. Awesome!

In this blog I will provide a few, simple examples which make use of this capability to carry out some simple Python commands. I shan't go through the installation and set-up of the Machine Learning Services feature, because it has already been done elsewhere. Instead, I'll just point you to the Microsoft docs.

The Python integration is enabled by the 'sp_execute_external_script' stored procedure, which is enabled as part of the installation & configuration process detailed in the link above. The stored procedure and its parameters look like this:

The official details of this stored procedure can be found through the link I've posted at the bottom of this page. Although I'll explain the parameters here in my own words and include any comments I think are worth knowing:

Note: Pandas is a popular data wrangling library for Python. It's imported in the Python script by default (invisibly), although if you want to name it as 'pd', or some other alias, you will need to state that explicitly.

So let's see how this works with a few examples.

The first example is a script that maps the day number (1-7) to the day of the week (Mon-Sun) (which is based on this example. Please refer to these docs for licensing agreements). I've modified it a little so that there's less going on than in their example.

So some input data is inserted with this command:

Which, as you can see, is just a table with one column.

Now, since the default value for the parameter '@input_data_1_name' is 'InputDataSet', I needn't have it in there. But I do. Oh well. :) The other point worth mentioning in this example is the WITH RESULT SETS command at the bottom. To quote the docs for the stored procedure:

"By default, result sets returned by this stored procedure are output with unnamed columns. Column names used within a script are local to the scripting environment and are not reflected in the outputted result set.  To name result set columns, use the WITH RESULTS SET clause of EXECUTE."

Which is a bit annoying, but again – oh well.

The output of this query (found in the 'Results' pane in SSMS) looks like this: 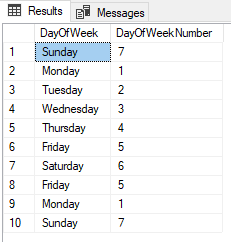 In-lining the whole Python script is all well and good if the script is short – but how about when you have a large script? This would look messy inside a stored procedure. To that end, I took it upon myself to figure out how to package up a Python file and to be able to import it within the script.

This is done in the normal Python way: Create a folder and insert a blank 'init.py' file along with your Python files which include the definitions you have created. Now this folder needs to be placed somewhere Python (or SQL in this case) can see it.

Now an easy way to do this in a Python IDE is finding out what the system paths are using the sys.path function. Then you can either just plonk your packaged folder somewhere along one of those paths, or use the sys.path.append command to add a custom directory to the system paths so that the interpreter can find the file.

However, the only way I've got it working inside SQL is by putting the custom package inside the SQL Server's own PythonPath that is created when the Python Machine Learning Services feature is installed. Of course, this isn't ideal, as the package could be wiped if there is an update or reinstallation of SQL Server.

So, ideally, the custom packages would be placed outside the install folder – but we (my colleagues and I) are yet to find a way to get this working. I've reached out to the Microsoft Developer Network, but if anyone reading this has any solutions/suggestions, I'd be very grateful to hear them!

Anyway, after placing the packaged-up files inside the PYTHON_SERVICES folder inside the SQL instance directory, all you have to do is import the module and invoke its definition.

And invoking it directly in SQL:

Which produces the same output as the previous example.

One can easily make this into a stored procedure with an input variable that takes a table of the same schema as our sample table, as shown in the code here:

The other parameter @r_rowsPerRead determines the number of batches in which to execute the code. So if your dataset has 10000 entries, and you set the @RowsPerRead parameter as 5000, the stored procedure will execute the script twice. This is especially good for large datasets and limited compute resources. The first 'print' command tries to show this capability in the output after the stored proc has been executed.

So we execute using a command like the following:

And, in the 'Results' pane, we have the same output as before. In the 'Messages' pane, where any written output from the Python script is stored, we see this: 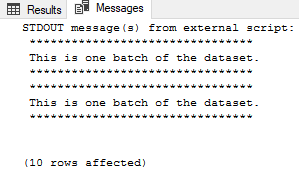 Which shows that the query has been executed in two batches.

The second example is a simple script that generates a list of random numbers based on start number, end number and length. Here's the query for this:

I've purposefully created a mix of declared variables and constants, to show that everything can be altered inside the script if needs be. For example, I declared the variable @Start_Value as an integer equal to zero before entering the stored procedure, but then inside the stored procedure I changed its value to 10. Likewise, the constants I've set for @End and @Size will stay the same unless you say otherwise.

Here's the output of this query:

Which, as you can see, is a list of length 20 with random integers between 10 and 100. This query can again be easily changed into a stored proc, with all 3 variables passed in as arguments:

And a sample execution:

Which returns, as expected (or unexpected?):

The final example, and the simplest of the lot, calculates a few values (mean, min, max) from a list. Here's the query:

So the output in the 'Results' pane is:

And the output in the 'Messages' pane is:

That example draws an end to this blog about the Python integration in SQL. Although very simple, I've tried to structure the examples to cover all the stuff that I was confused by when I first used this feature.

Then again, I hadn't really used SQL much before I started looking into this Python integration! Before I sign off, below I've listed a few resources I found helpful whilst learning about this feature. The last link points to the github repo which contains all the source code:

Hope this blog helps, and thanks for reading!

SQL Serverless in Azure Synapse provides a structured way to query your data on-demand directly from your data lake. This consumption-based, flexible approach to data warehousing provides a compelling alternative to the traditional star-schema or RDBMS, but comes with it's own set of new challenges. This post explores some of the considerations around managing schemas in a serverless world, including an approach for ensuring that your data and schema remain in sync.

Great, so I've configured my Lake Database in Azure Synapse Analytics. But since I'm using parquet-backed files, my column names aren't very user-friendly. I also have these calculated columns incorporating business logic that I'd like to query on the fly rather than persist them to backing data. I also want to give specific end-users access to this database and provide them with pre-defined reporting queries to get them up and running as quickly as possible. How can I do this? Enter Custom Objects in Lake Databases - now you can create VIEWs, Stored Procedures, USERs (amongst other objects) in what used to be a read-only database. This article explores the customization options and how it can help you organize your reporting data in Azure Synapse Analytics
Github Twitter LinkedIn

Ed is a Software Engineer helping to deliver projects for clients of all shapes and sizes, providing best of breed technology solutions to industry specific challenges. He focusses primarily on cloud technologies, data analytics and business intelligence, though his Mathematical background has also led to a distinct interest in Data Science, Artificial Intelligence, and other related fields.

He also curates a weekly newsletter, Power BI Weekly, where you can receive all the latest Power BI news, for free.

Ed won the Cloud Apprentice of the Year at the Computing Rising Star Awards 2019.