TLDR; the title of this blog is a take on the name of the book that inspired the Blade Runner movies "Do Androids Dream of Electric Sheep" written in 1968 by Philip K. Dick. In my case, I was inspired during a weekend helping out on the farm to think about the increasing use of AI in all walks of life. My thought experiment considers the situations in which it makes most sense to apply AI. I also consider the pitfalls and challenges that often come with digitally transforming business processes that have, up until now, remain unchanged for tens, possibly even hundreds of years.

A few weekends ago, I was drafted in along with my wife and a few other family members to help out at my father-in-law's farm. The job was to scan over 300 pregnant sheep to determine how many lambs each was carrying.

With lambing due to start in the next few months, this data is useful as it allows the shepherd to feed the pregnant sheep appropriately based on the number of lambs they are carrying. Furthermore, ewes that are carrying triplets are likely to need help during birth, so they can be brought indoors and kept under closer observation. A great example of a data driven business! 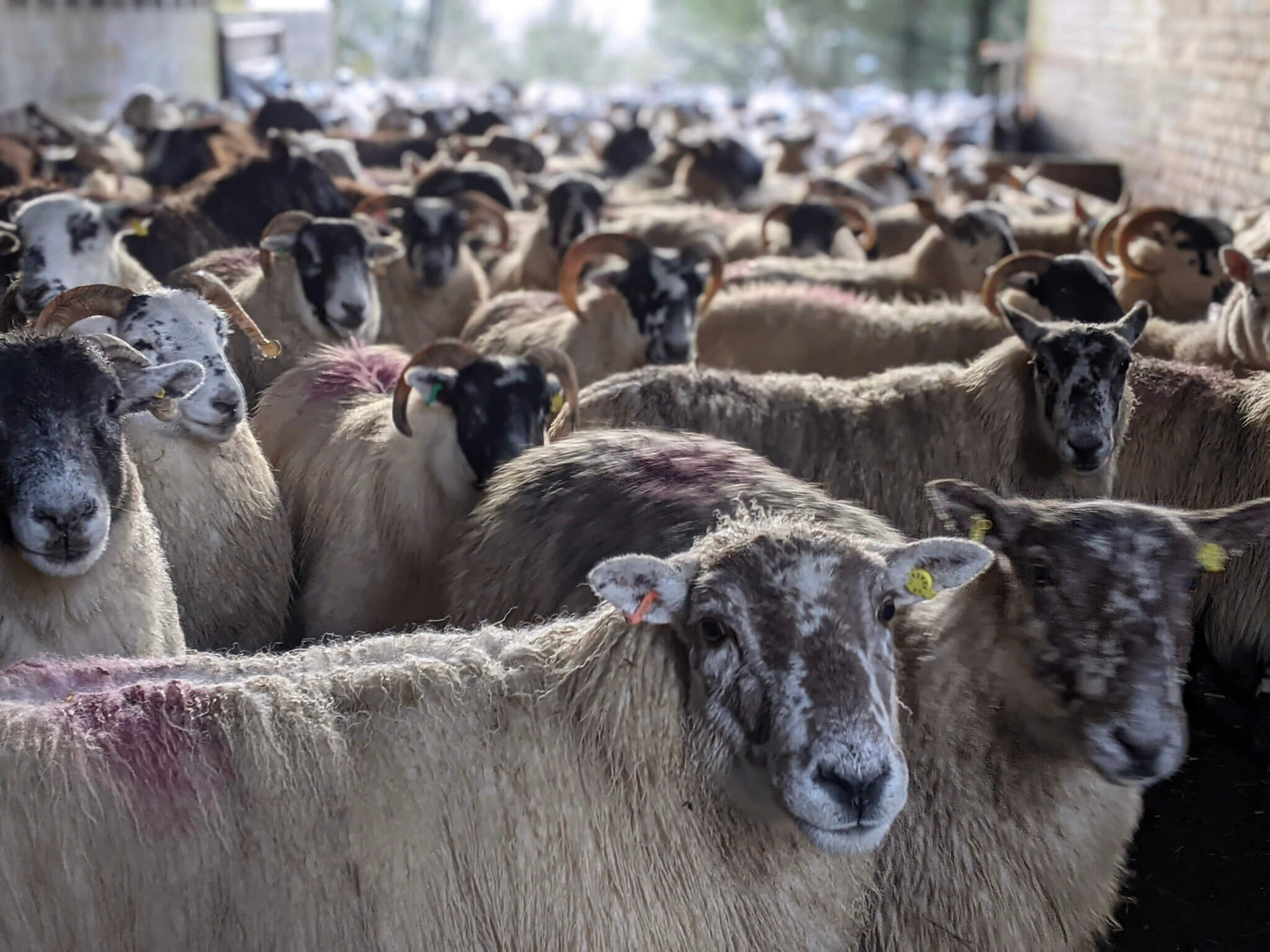 The job of scanning each sheep is skilled and requires specialist equipment, so an external contractor is usually brought in. In this case a chap called Stuart Wright who is extremely busy at this time of year scanning sheep at farms all over Scotland.

As a free unskilled labourer, my job was to encourage the sheep to move through the fank and ultimately to get scanned by Stuart. My father-in-law maintained that I should be paying him for organising such excellent "weekend entertainment"!

Stuart had a purpose built trailer to help him do his job: it provided a narrow race through which only one sheep at a time could pass and a covered area kept dark so that he could read the screen on the ultrasound device easily. Stuart sat on a low level seat so he could easily reach the belly of each sheep with his ultrasonic transceiver and with his foot he operated gate to let each sheep out after it has been scanned. A lot of multi-tasking! 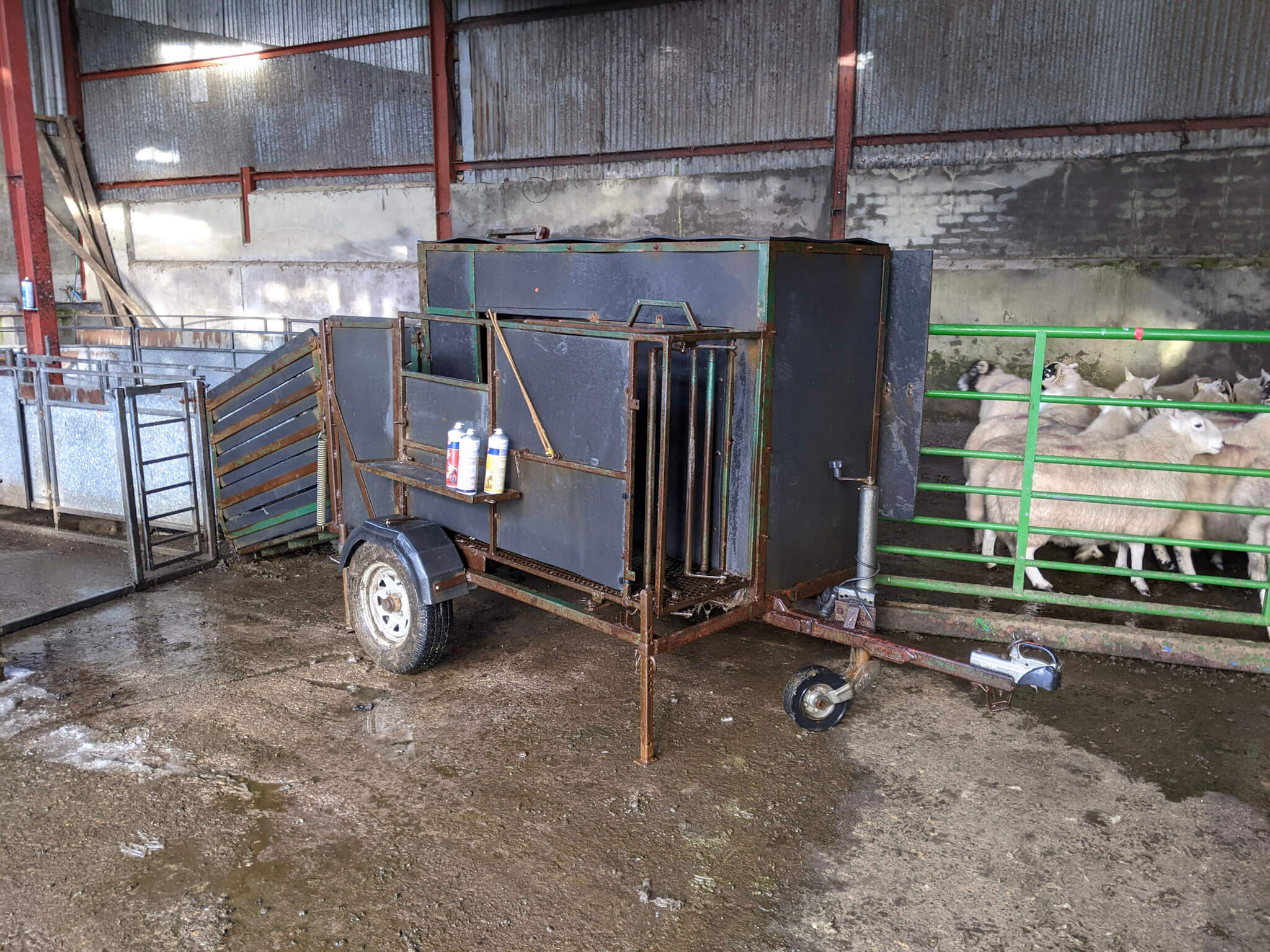 The trailer was a great example of simple "no frills" engineering to solve a real problem. As you can see from the photo above, this was all about functionality not aesthetics. It was focused on one objective: to enable as many sheep to be scanned in as short a space of time as possible, safely and with minimum effort

Stuart also explained how the design of his trailer had evolved over time: based on the experience of using it "in the field" adjustments in the design had been made accordingly. A great example of the Lean Startup Build-Measure-Learn feedback loop in action!

Farming is the world's oldest industry, and up until now, it has largely escaped the digital disruption we have seen in other industries. However there are an increasing range of innovative data driven initiatives in the sector such as Microsoft's recently announced partnership a dairy cooperative in America to use technology such as cloud connected pedometers to track the wellbeing of cows. Or a cloud platform called Azure FarmBeats that applies AI, IoT and edge computing to agriculture to turn data sources such as satellite or drone imagery and data from soil sensors into actionable insights for farmers.

Whilst I was providing my free labour, I was watching Stuart scanning each sheep - about one every 5 to 10 seconds. I got to thinking: is this a task that could be carried out by a machine? Is sheep scanning the next big opportunity for AI?

I asked Stuart. He thought not. He cited complexities such as the need to dynamically adjust the position of the transceiver on a moving subject (unlike their human counterparts, the sheep do not stay still when they are being scanned!) and the skill in picking out the forms of the unborn lambs from the noisy constantly shifting ultrasound readout. See photo below of Stuart (inside te trailer) scanning a sheep: 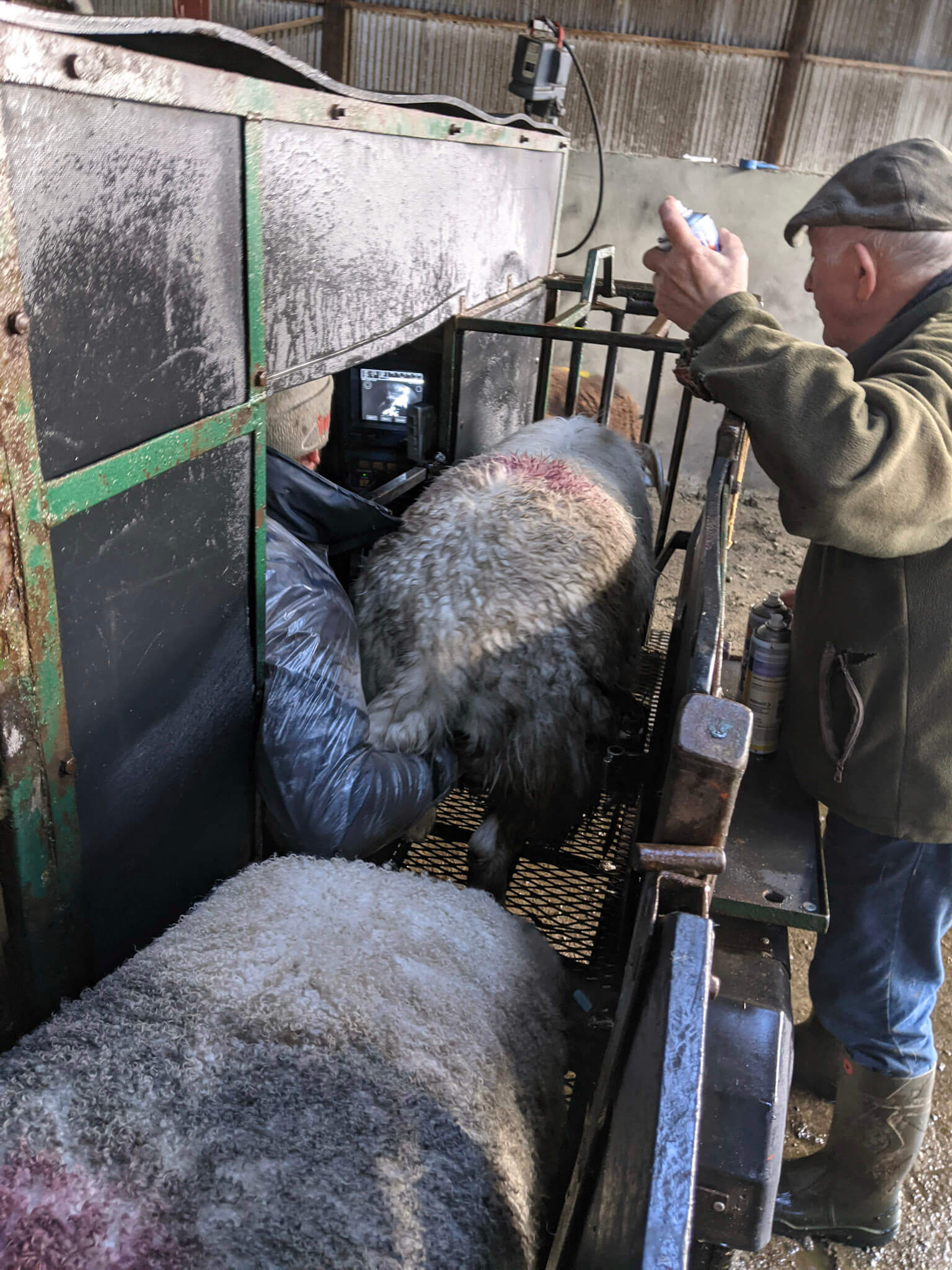 My own thoughts were that an intelligent agent probably could be developed to do this job. The "task environment" for this intelligent agent, defined using the PEAS acronym, would present some challenges but it was not at the "extremely difficult" end of the spectrum:

Indeed there are already a number of precedents for this type of intelligent agent in farming. The most compelling being robot milking in dairy farms. In this video report from the BBC "Robot milking saved my dairy farm", farmer Neale Sadler talks about the positive experience he has had using robot milking for the last 13 years:

A great example of digital transformation having an all round positive impact.

Other points worth noting from this video:

So going back to Stuart's sheep scanning job - is he going to be displaced by a machine any time soon? It was time to apply some commercial reality to my thought experiment: asking not "can it be built?" but "does it make commercial sense to build it?". Another question that surprisingly many organisations fail to ask before embarking on large technology investments.

Stuart is paid based on a fixed a fee per sheep scanned. So the more sheep he could scan in an day, the more he could earn.

Firstly, it was difficult to see how AI could drastically increase the daily capacity by the order of magnitude often required to make such an investment worthwhile: i.e. scanning one sheep every 1 second (rather than every 10 seconds). Furthermore, even if the technology could allow him to scale up to this degree, it is clear that other factors come into play that would constrain the business model:

So my conclusion was that Stuart's job was probably safe for the foreseeable future! 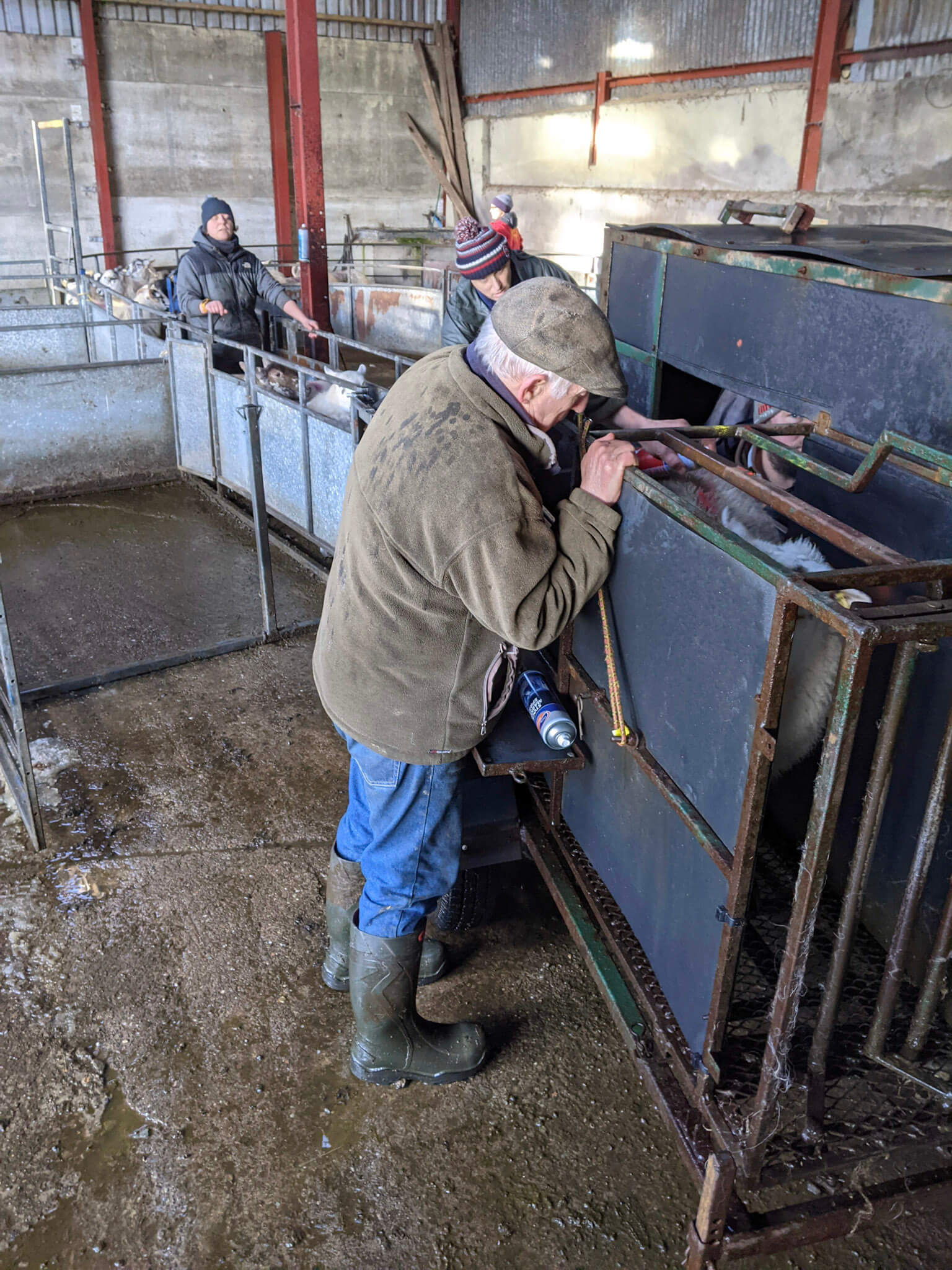 However, I thought there were potentially smaller parts of the end to end value chain that could benefit from the application of technology:

These are all examples of repurposing technologies that have been proven in other areas and applying them to a new process. This type of incremental, low cost, low risk investment seems a more realistic way to "digitally transform" this particular process.

Indeed the application of AI to make small incremental improvements in this way is often the best way to deliver maximum impact. Andrew Ng, a world renowned expert in AI believes:

"If a typical person can do a mental task with less than one second of thought, we can automate it using AI."

I would agree, in particular if that task is repetitive in nature. So it's about finding the parts of the business process where technology can deliver maximum impact and using this to incrementally transform the way that people work. Howard van Rooijen demonstrated the power of this philosophy in his blog by using Azure to deliver a series of micro-optimisations that collectively transformed the process of identifying and accounting for business expenses.

So what one second tasks should we target with this micro-optimisation approach? Part of the answer is that we need to recognise the relative strengths of humans and machines:

Whilst certain jobs (or tasks within a job) will be exclusive to either humans or machines based on these strengths, experts also predict that new jobs will emerge based on humans and machines working together.

A recent example of this was when Elon Musk, when facing significant delays in production of his Model 3 Tesla, admitted "Yes, excessive automation at Tesla was a mistake. To be precise, my mistake. Humans are underrated.". It was not until he reintroduced humans to his production line to work alongside the machines that he achieved the level of productivity needed to keep his business on track.

The barrier is often people not technology

This brought me onto my final thought. What I find is that the barrier to successful digital transformation is more often the people, not the technology. I have had experiences during my career where people have actively resisted adoption of a new technology based on their own personal motivations, or a silo mentality, rather than based on the greater good. This has resulted in projects stalling, or in extreme cases failing altogether.

But even when people are open minded, they can often find the impact uncomfortable. For example, a couple of years ago, I met a finance manager at a global technology firm who had a significant proportion of his role replaced by a machine learning algorithm. That algorithm had been proven to consistently produce more accurate financial forecasts than he and his team could. As a result, he had to adapt his role to work with the machine. This was not something that he had found comfortable at the time. But having worked through the change, he now admitted his new role was more rewarding because he was now freed up to focus on higher value tasks.

Businesses are turning more to technology to survive in an increasingly digital world. So technology professionals are frequently finding themselves in situations where skills that they are not traditionally experienced in (such as communications and change management) are becoming critical.

In my experience the projects that have managed to address this have had the following common attributes:

Data is the new soil

Thinking of data as the new soil is useful in highlighting the key elements that enable a successful data and analytics initiative.

This is a summary of the sessions I attended at SQLbits 2022 in London, which is Europe's largest expert led data conference.

In his Web Summit keynote, Microsoft President, and author of the book 'Tools & Weapons', Brad Smith highlighted OceanMind as one of the key organisations using AI for Good.
Github Twitter LinkedIn

Barry has spent over 25 years in the tech industry; from developer to solution architect, business transformation manager to IT Director, and CTO of a £100m FinTech company. In 2020 Barry's passion for data and analytics led him to gain an MSc in Artificial Intelligence and Applications.